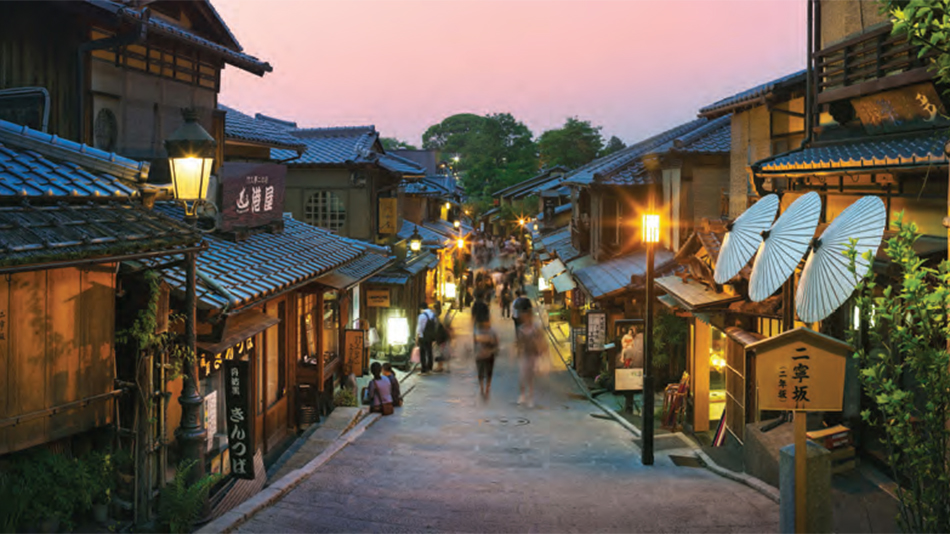 4 days stopover in Kyoto, a city of deep philosophical cultural traits with an abundance of temples and shrines, Kyoto is one of the best preserved cities in Japan and contains no less than 17 spectacular UNESCO World Heritage Sites.

The nation’s former capital and one time residence of the emperor from 794 until 1868. It is a city of deep philosophical cultural traits with an abundance of temples and shrines for the traveler to explore – more than 2,000 religious buildings in total. Kyoto is one of the best preserved cities in Japan and contains no less than 17 spectacular UNESCO World Heritage Sites.

Day 1 Arrive Osaka
Upon arrival at Osaka Itami Airport or Kyoto Railway station, you are met and assisted to board the airport transfer bus to the Hotel in Kyoto for a 3-night stay.

Day 2 Kyoto (B)
This morning, admire the incredible historical legacy of Kyoto, the former capital of Japan, as you explore the city’s top castles, temples, palaces and gardens.

Visit the UNESCO World Heritage site of Nijo Castle, one-time home of the Tokugawa Shogun, constructed in 1603, contains five connecting structures made of Cypress wood. The complex is renowned for its elegant design and striking interiors, including the gold leaf-covered living quarters and the home’s extensive kitchen, guardhouse and multiple gardens.

Continue to the glorious Kinkakuji Temple (Golden Pavilion), the most popular temple in all of Kyoto. Admire the intricate architecture and serene Japanese gardens, along with the site’s namesake structure, the celebrated Golden Pavilion.

Proceed on to the Kyoto Imperial Palace, once the residence of the Japanese Emperor before the national capital was relocated to Tokyo in 1868. View the former site of the imperial enthronement ceremonies and observe the elegant simplicity of the building’s interior design and architecture.

The afternoon, enjoy an excursion to Nara, founded in 710 and was designated as the country’s first permanent capital. Nara or Heijo as it was then known, was home to many of the most important Buddhist monasteries in the then-nascent Japanese empire, which made it a key center of political and religious power.

Visit the magnificent Todaji Temple, constructed in the 8th century and is among the country’s most important religious buildings. Explore the temple’s Daibutsuden (Great Buddha Hall), one of the largest wooden buildings in the world, along with its immense bronze Buddha statue, which are just some of the treasures to be found in this incredible attraction.

Continue a visit to its famous deer park, a unique 1,250-acre preserve where more than 1,000 deer freely roam.

Next, see the Shinto shrine of Kasuga, a serene site that features a collection of more than 3,000 stone and bronze lanterns before returning back to Kyoto.

Day 3 Kyoto (B)
Full day at leisure to explore Kyoto on your own.

Perhaps choose an optional tour to explore the Sagano Bamboo Grove and Arashiyama Mountain, a day to visit Uji and Fushimi, Sake brewery or an excursion to Hiroshima & Miyajima.

Day 4 Kyoto Departure (B)
Transfer from hotel to the Itami airport in Osaka for your onward journey.

$610
per person based on sharing
REQUEST A QUOTE

$735
per person based on sharing
REQUEST A QUOTE

$1015
per person based on sharing
REQUEST A QUOTE
Above prices are based on 2 guests travelling together. High season and holiday supplement applicable for travelling between March 15 to May 31, September 20 to November 30. We offer a wide selection of hotels and customized itinerary. Click the button to request a specific quote based on number of guests, their interests and budget.

Be the first to review “Kyoto Stopover – 4 days” Cancel reply