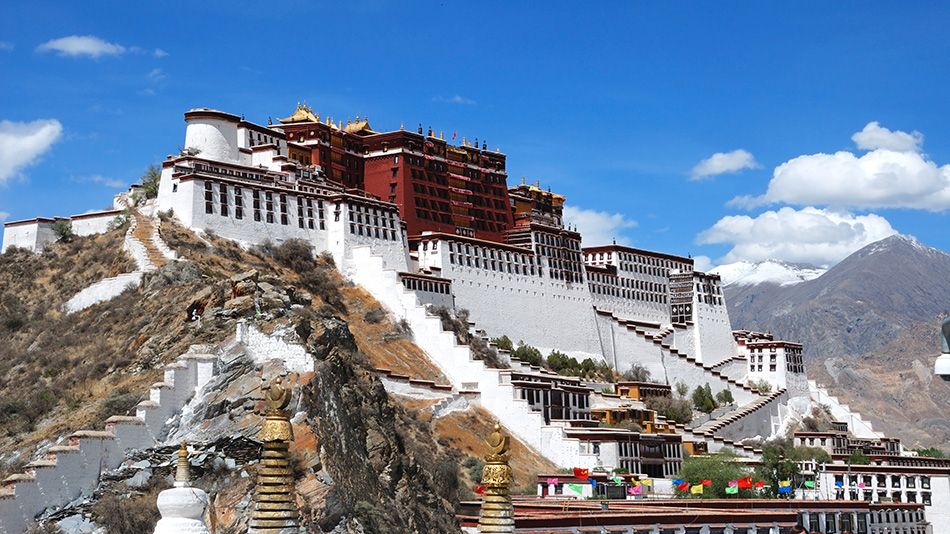 Lhasa – The Heart of Tibet

5 days 4 nights visit Lhasa, the heart and soul of Tibet – an awesome experience.

Upon arrival meet and assist at the airport by our representative. Transfer to the hotel. Rest of the day is at leisure.

Sera Monastery: 5km North of Lhasa, the Sera Monastery’s setting is one of the prettiest in Lhasa, hugging the ridge that forms the Northern wall of the Kyi Chu Valley. Founded in 1419, Sera Monastery is one of the “great three” Gelukpa university monasteries in Tibet. The other two are Ganden Monastery and Drepung Monastery. The origin of the name ‘Sera’ is not certain, but it may have come from the wild roses (se ra in Tibetan) surrounding the original site.

In its heyday, Sera hosted a huge monastic population and five colleges. Like Drepung, the colleges in Sera specialized in: Sera Me in fundamental precepts of Buddhism, Sera Je in instruction of itinerant monks and Sera Ngagpa in Tantric studies.

The monastery is magnificent, featuring a unique style quite different from other famous monasteries in Lhasa and covering an area of 114,946 square meters (28 acres). Its main buildings are the Coqen Hall, Zhacang (college) and Kamcun (dormitory). Buddhist Scriptures written in gold powder, fine statues, scent cloths and unparalleled murals can be found in these halls. The monastery is a Buddhist think-tank and lively debates on Buddhist doctrines are held here.

Drepung Monastery: About 8km to the west of central Lhasa, Drepung is one of the “great three” Gelukpa university monasteries of Tibet. The other two are Ganden and Sera. Seen from afar, Drepung’s grand, white construction gives the monastery the appearance of a heap of rice hence; Drepung literally means ‘heaps of rice’. The fertility of its fields supported a monastic community that before 1959, ranked as Tibet’s largest monastery with 7,770 monks. Since the 1950s, Drepung Monastery, along with its peers Ganden and Sera have lost much of their independence and spiritual credibility in the eyes of Tibetans since they operate under the close watch of the Chinese security services.

For over 500 years Drepung served as the major pillar of the theocratic state, serving as the main political headquarters for the Gelugpa sect of Tibetan Buddhism. It also served as the residence of the Dalai Lamas until the Potala Palace was constructed in 1645. Suffering only minor damage during the Cultural Revolution Drepung has plenty of historical relics, Buddhist scriptures and arts.

The Drepung Monastery houses many cultural relics, making it more beautiful and giving it more historical significance. Statues of famous celebrities in Buddhism are found on the first story of the Coqen Hall, rare sutras on the second story, and a famous conch shell on the third one. All of these add to the mystique of the monastery.

Potala Palace: Potala Palace, the chief residence of the Dalai Lama since the 7th century has been the focus of the travelers for centuries. It is the cardinal landmark and a structure of massive proportion. It symbolizes Tibetan Buddhism and its role in the traditional administration of Tibet. It is an architectural gem that was built in the colossal monastic style of Central Tibet in the 7th century but rebuilt in the mid 17th century. The Tibetans themselves rarely speak of the sacred place as the “Potala”, but rather as “Peak Potala” (Tse Potala), or usually as “The Peak.”

It stands 300m above the valley floor, atop the hill called Marpo Ri, the ‘Red Hill’. The Potala Palace is an immense structure with an interior space of about 130,000 square meters, it has thirteen stories of buildings containing 1000 rooms, 1000 shrines and about 200,000 statues that date from 1645 when the fifth Dalai Lama began erecting a palace that would serve as a sacred and administrative center. It served all the succeeding Dalai Lamas until the 14th Dalai Lama who fled to Dharamshala, India during the 1959 Tibetan Uprising. Today, the Potala Palace has been converted into a museum by the Chinese authorities.

The Potala palace is one of Tibet’s most impressive and enduring monuments that was protected by the Chinese Army of Red Guards during the Cultural Revolution. As a result many of its chapels and treasures are intact, virtually unchanged since the 17th century. It was listed as a UNESCO World Heritage Site in 1994.

Jokhang Temple: Jokhang meaning ‘House of the Lord’ in Tibetan is located at the center of the old Lhasa and is the oldest and the most revered religious structure in Tibet. Built in 647 by Songtsen Gampo, it has a history of more than 1,300 years. It was built by craftsmen from Tibet, China and Nepal and thus features an intriguing mix of architectural styles.

Jokhang Temple also houses many invaluable cultural relics. Every year, the Great Prayer Festival is held here. The rites of Dalai Lamas and Panchen Lamas’ initiation into lamahood are also held in the monastery.

Princess Wencheng made use of Chinese astrology to decide that the temple should be built over the pool where the temple is now located. She believed that the pool was a witch’s heart and that building the temple over it would purify the area of evil. This pool still exists under the temple. Outside the temple an old and withered willow tree has survived centuries and is said to be planted by Princess Wencheng herself.

Norbulingka: Built 100 years after the Potala palace, Norbulingka means ‘Treasure Park’ in Tibetan and is situated in the western suburb of Lhasa City, on the bank of the Kyichu River, about one kilometer southwest of the Potala Palace. It is the biggest man-made garden in Tibet. The park was built by the Seventh Dalai Lama in 1755, and became the summer residence of the Eighth Dalai Lama. The garden contains an abundance of chapels, gardens, fountains, and pools as well as a variety of beautiful flowers and trees. Norbulingka reflects both the ethnic and religious traits of the Tibetan people and embodies the architecture style of inland China. It is of great cultural value and was listed by UNESCO as a World Cultural Heritage Site in 2001 as an extension of Potala Palace.

During the Cultural Revolution, the Norbulingka complex suffered extensive damage. However, in 2001, the Central Committee of the Chinese Government in its 4th Tibet Session resolved to restore the complex to its original glory.

The garden is a favorite picnic spot and provides a beautiful venue for theatre, dancing and festivals, particularly the Sho Dun or ‘Yoghurt Festival’, at the beginning of August, with families camping in the grounds for days surrounded by colorful makeshift windbreaks of rugs and scarves and enjoying the height of summer weather. There is also a zoo at Norbulingka, originally to keep the animals that were given to the Dalai Lama. Heinrich Harrer helped the 14th Dalai Lama build a small movie theatre there in the 1950s.

Barkhor Market: Barkhor Street is the oldest street in Lhasa and runs through the center of the old city. It is a circular street where Tibetan culture, economy, religion and arts assemble. The word Barkhor refers to the middle of the three concentric holy circuits around the Jokhang.

The Barkhor Circuit runs through the heart of the old city where life has changed little down the centuries and it gives you a curious sensation of having slipped through time into a medieval carnival. Tibetans walk clockwise around the Jokhang Temple to pay their respects to Sakyamuni, establishing Barkhor Street as Tibet’s “Sacred Way”. Each day hundreds of Buddhist pilgrims flow in from every corner of Tibet and across China to make the trek through Barkhor Street. Some merely walk, but some progress by body-lengths along the street clockwise every day into deep night to worship Sakyamuni. Barkhor will allow you to experience firsthand the religious fervor of Tibet.

A short drive to North – East of Lhasa is the Yerpa Cave, one of the holiest cave retreats ever. At one time the hill at the base of the Cave – dotted cliffs was home to the Yerpa Monastery. The Monastery, however, was effectively laid to waste in the Cultural Revolution and there is very little to see nowadays. The site is very peaceful and offers stunning views.

It is probably not of great interest for the average traveller but, for those with a particular interest in Tibetan Buddhism, Yerpa is one of the holiest cave retreats ever. At one time the hill at the base of the Cave – dotted cliffs was home to Yerpa Monastery. The Monastery, however, was effectively laid to waste in the Cultural Revolution and there is very little to see nowadays. The history of Dark Yerpa includes many of the great names responsible for the establishment of Buddhism in Tibet. The Emperor Songtsen Gampo meditated in seclusion here: Guru Rimpoche and several of his disciples also meditated here: and here Jowo Atisha chose to preach extensively. Although the ancient Kadampa Gompa has been destroyed, the geomantic qualities that made Drak Yerpa a major power place still remain and still attract hermits to its caves.

It’s about a 90 minutes’ drive each way. Getting to the Yerpa Caves involves an hour and half hike with gradual ascent and 45 minutes’ walk back.

Transfer and assist at the airport by our representative.

Based on Category A

$850
Land only per person based on sharing

Based on Category B

$1095
Land only per person based on sharing

Based on Category C

$1750
Land only per person based on sharing