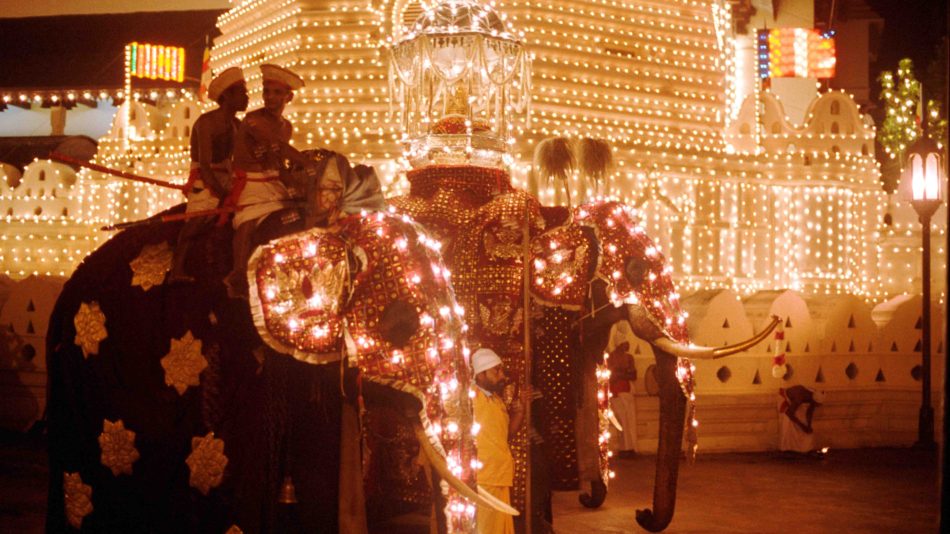 Explore the enchanting and spectacular highlights of Sri Lanka, including the capital of Colombo, spectacular Sigiriya Rock and the cave art of Dambulla. Immerse yourself in the cultural sites of Kandy, wander through quiet villages, meet the locals and savour delicious Sri Lankan cuisine.

Upon arrival in Colombo airport, your driver guide and our representative will meet and welcome you at the airport. Your driver will assist you with your bags and then, you will be transferred to Negombo. Upon arrival in Negombo you will check in at your pre-booked hotel.

Negombo is the heartland of Christian Sri Lanka, as borne out by the enormous churches and the wayside Catholic shrines scattered about the town and its environs. The Dutch made the town an important commercial center,building a canal on which spices-particularly cinnamon which grew profusely in the surrounding areas-were transported from the interior to the coast before being shipped abroad.

Overnight at the Hotel in Negombo

Transfer from Negombo to the Pinnewala Elephant Orphanage, one of Sri Lanka’s most popular attractions. Situated halfway between Colombo and Kandy, the orphanage has a population of about 75 elephants, making it the world’s largest collection of captive elephants. The elephants here range from newborn calves to elderly matriarchs and include orphaned and abandoned elephants, as well as those injured in the wild. Among them are its famous residents-Sama the lame elephant, injured by a land mine during the ethnic conflict in the North, and Raja the blind elephant. Experience the sheer delight of watching these great pachyderms frolic in the river at bath time or the baby elephants being fed twice a day.
Transfer from Pinnawala to Dambulla/Sigiriya. [ 2 ½ Hrs drive approximately ]
Overnight at the hotel in Dambulla/Sigiriya

Day 03: Sigiriya
Morning visit & climb Sigiriya [ 1 ½ Hrs drive approximately ]
SIGIRIYA……..A remarkable archeological site made unforgettable by its dramatic setting – the ‘Lion Rock’ is a citadel of unusual beauty, rising 200m from the scrub jungle situated in the Central District. This ancient rock fortress and palace ruins, famed for its frescoes, was built during the reign of King Kassyapa (AD477 -495). It was developed into a complex city and fortress. Considered one of the most elaborate and imaginative planning sites of the first millennium, the plan combined concepts of symmetry and asymmetry to intentionally interlock the man-made geometrical forms with the natural forms of the surroundings. It contains a park for the royals laid out on a symmetrical plan, and contains water retaining structures-including sophisticated surface/subsurface hydraulic systems-some of which work even today. There is also a man-made reservoir. The Gardens of the Sigiriya city is one of the oldest landscaped gardens in the world. They are divided into three distinct but linked forms: water gardens, cave and boulder gardens, and the terraced gardens.

Transfer from Sigiriya to Polonnaruwa.[ 2 Hrs drive approximately ]
POLONNARUWA……….Polonnaruwa is the 2nd most ancient kingdom of Sri Lanka and it has an interesting mix of Buddhist and Hindu structures that is a testament to the different kings who reigned over it. Polonnaruwa rose to prominence between the 11th and 13th centuries and thrived during the reign of the famous monarch, King Parakramabahu I, who did much to create a resplendent city. His greatest achievement was the construction of the sea of Parakrama, a huge water reservoir spanning an area of 6280 acres. The ruins at Polonnaruwa are within walking distance and many of them set in tree-shaded areas, a welcome refuge from the tropical sun. This ancient city, which is one of the best planned archeological relic sites in the country, is standing testimony to the discipline and greatness of the Kingdom’s first rulers. Duran Duran used Polonnaruwa as a back drop to their music video ‘Save a Prayer’ in 1982.

Day 04: Habarana – Dambulla – Matale – Kandy
Morning visit to Dambulla. [ 2 Hrs drive approximately ]
See Dambulla and be dazzled! It is home to the largest and best preserved cave temple complex in Sri Lanka, the Iron Wood Forest (Namal Uyana), and the Rangiri Dambulla International Cricket Stadium( built in just 167 days). Dambulla is also said to have the largest rose quartz mountain range in South Asia. The Rock Caves are situated on a vast isolated rock mass 500 ft high with a span of a mile around its base. Access these caves by climbing approximately 200 steps and 18 terraces. The Golden Dambulla Rock Temple, which is on the highest terrace, consists of 5 magnificent caves built into the rock. They house a collection of 150 statues of the Buddhist orde. The first cave houses a 14m long Buddha statue, depicting the final extinction, carved out of solid rock. The 2nd cave, which is the finest and largest, has 40 seated statues of the Buddha. Also on display are statues of Hindu Gods. The entire cave(walls and ceilings) are covered with Buddhist murals which are some of the finest in Sri Lanka. The 3rd cave, with its paintings on the ceiling and walls in the Kandyan tradition, contains 50 Buddha statues. Visitors are treated to a panoramic view of the surrounding flatlands, reservoirs and forests.

Transfer from Dambulla to Matale. [ 2 Hrs drive approximately ]
MATALE …..A pleasant hour’s drive from Kandy along roads lined with lush tropical trees, Matale is a small town renowned for its Spice Gardens. The world’s best cinnamon comes from here. Visit these gardens and see how these spices are grown and processed. Visitors can watch a cookery demonstration on how these spices are used in Sri Lankan cuisine and they may take home a selection of garden fresh spices.

Transfer from Matale to Kandy. Upon arrival in Kandy check in at your pre-booked Hotel.
Overnight at the Hotel in Kandy

Day 05: Kandy
Breakfast at the Hotel
KANDY CITY TOUR …..This jewel of a city, set 480m above sea level and surrounded by mountains, is the hill capital of Sri Lanka. Kandy was the last independent Kingdom of Sri Lanka, which survived two centuries of colonial incursion before finally falling to the British at the beginning of the nineteenth century.

Visit the majestic Royal Palace and the Temple of the Tooth, known as the Dalada Maligawa, set at the edge of a beautiful artificial lake, which is home to the island¿s most revered relic, the Buddha’s tooth, which arrived here in the sixteenth century. Transfer from Kandy to Peradeniya visit Peradeniya Gardens,Take a stroll down the expansive Peradeniya Botanical Gardens, the largest and finest in Sri Lanka, which covers almost 150 acres. A pleasure garden of the kings of Kandy, it was transformed into a botanical garden by the British in 1821, and is home to a variety of local and foreign tree and plant species. Kandy is famous for its shopping. The narrow streets are lined with shops displaying beautiful precious and semi precious gems, skillfully crafted jewelry, handicrafts, colourful batiks, silks and many such items.

Kitulgala is the setting for academy award winning British film The Bridge on the River Kwai.
The Bridge on the River Kwai is a 1957 British World War II film by David Lean based on the novel The Bridge over the River Kwai by French writer Pierre Boulle.
The scene creation of the film was done in Sri Lanka and many of them were at Kitulgala area including the climactic scene of the bridge explosion.
The Kitulagala river is very popular with both locals and foreigners alike as a hotspot for white water rafting or adventure based activities.

Day 07: Bentota
Breakfast at hotel, optional Visit to turtle hatchery and moonstone mine
Kosgoda is famous for its sea turtle conservation project operated by the Wild Life Protection Society of Sri Lanka. It was established in 1988 to protect Sri Lanka’s turtles from extinction. Since then it has released about 3.5 million baby turtles into the wild. The hatchery pays fishermen for eggs that they collect at night along the long sandy beach. Although October to April is the main laying season, some eggs (mostly green turtles) can be found at Kosgoda throughout the year.
Moonstones are in the semi-precious category and are an important component of the Sri Lankan gem industry. The finest are bluish in colour and are found in high concentrations 7km inland inMitiyagoda. Moonstones have been mined in these sweltering forests forever and the moonstone mines, little more than muddy rabbit holes, 6m or 7m long, are fascinating as is the process of filtering out the precious stones, cutting and polishing them ready for sale. At the Moonstone Factory you can see or even go down a narrow shaft where the stones are mined. Thereafter relax and enjoy on the beach.

Day 08: Bentota – Colombo – Airport
After breakfast, transfer to Colombo Airport to board flight for Onward Journey.

If your flight leaves later afternoon, suggest an optional Madu Ganga River safari, A boat excursion is the best way to navigate and enjoy what’s on offer at Madu Ganga, a stretch of lake with almost placid water dotted with many islets. You can visit an island with a Buddhist monastery, where the friendly young monks will show you a 150-year-old book made of palm leaves and how they cook using cinnamon wood on an open fire.

$1295
Land only per person based on sharing

$1450
Land only per person based on sharing

$1550
Land only per person based on sharing

Be the first to review “Essential Sri Lanka” Cancel reply